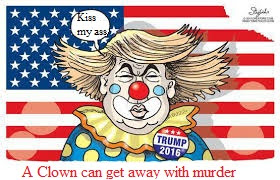 Trump made his strongest case yet for him continuing to murder, at will, without cause, recourse or retribution. Having previously stated "I could stand in the middle of 5th Avenue and shoot somebody and I wouldn't lose voters" he has doubled down by stating :


I could strangle a street walker, suffocate a homosexual runaway in a Walmart bathroom with a shopping bag, or push a homeless man in front of an oncoming A Train, by the way, Go New York! Either way, people don't care, especially not about the people I kill, believe me I choose the best victims, and with my properties around the globe, nobodies gonna find'em, they're [flutters hands in the air comically] gone!

Later on twitter he claimed the Mexi-Judaeo liberal cabal had twisted his words and he was going to "@#$%ing murder them!" but first  he was going to "Toy with them in his basement". It is unclear what exactly has made his fetishistic, rage based, but extremely calculated murders a topic for the campaign trail. Some analysts point to the sexual attraction and wonder inspired by many heinous murderers, especially those who gain fame and notoriety for their acts, and the kind of nut jobs that would fall for a monster, well that's the kind of crazy he wants in the Ballot box in November.

Posted by Blake Newberry at 5:06 AM