Erdogan now front runner for "Hitler of the Year" 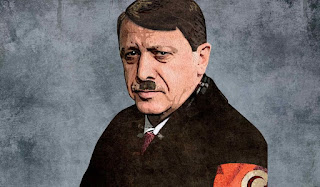 Between the amoral consummate party player and the out of control blustering populist id in America, as well as growing xenophobia in the UK, white Anglo's were thought to be a shoe in for "Hitler of the Year" until Erdogan "Coup". Of those who are unaware of the "Hitler of the Year" Award, they are chosen for their: Disregard for democratic institution, the subversion of legal safeguards, as well as about 213 completely secrete and esoteric criteria known only to the Hierarchy, and are in turn used to control the population, and bend them to the popular will.

Tens of thousands of Turkish citizens: School teachers, college professors, police Judges etc. are being detained, raped, tortured, and sever travel restriction have been placed on millions more, after a nebulous, short lived and seemingly harmless Coup on July 15th which seems to have given the President that would be Dictator a Casus Belli against all his enemies,no matter their actual involvement in the coup, after a suspicious incident where the nations parliament was bombed.

Here are what some contenders had to say about this upset:

"Hitler was powerful man, with a beautiful wife, who had the best' guns, the best planes, the best missiles, now am I going to go around killing Jews and Homosexuals, well yeah, but not because they are Jews and Homosexuals, so perhaps I wasn't running for the spot, but I woulda scrapbooked it" Trump said before tipping a wheelchair bound veteran into the crowd below while crying in anger over losing, despite the trivial nature of the award.

The Clinton campaign downplayed this slight to her endless lust for power, they chose to play offended "Hillary is an avowed and staunch Stalinist, and as such has a particular antipathy and sensitivity towards Nazism and Hitler in particular " they reported to Pravda, though sources around the former first lady report a considerable uptick in arbitrary summary executions of staff.

MP Boris Johnson was, as of press time, too involved with a maniacal scheme to drive Theresa May insane by sneaking his hyper-sexual feline familiar "Palmerston" into 10 Downing street, forcing the Prime Minister to furiously call the police to eject the protected and famous feline while a barely obscured Johnson giggled from the bushes outside.

While there are still four plus months and a US election before the final tally is in, and Hitler-esque leaders are known for their lighting fast moves, and explosive defeats. Yet, as of late July, there is no leader who has seized so much power, so eroded the independence and power of important institutions, and systematically and brutally crushing all opposition, which is what a leader must do to be "Hitler of the Year".
Posted by Blake Newberry at 1:58 PM No comments:

The DNC would like to remind you how evil all Russians are, always

As the DNC got their ass handed to them by a group of anonymous hackers, and their first inclination was to blame the Russians, based on the these correlating facts:
- How the information was inputted, could have been from a Cyrillic keyboard
- The hackers didn't work on Russian holidays
- The Hackers, people with the ability to manipulate electronic data, used IP addresses associated with Russian servers
- Russians are known to be be stone faced maniacs who will do and say anything to get what they want, and they will drown their conscious  in vodka later

A state dept sources who asked not be named for fear of Clinton's "Lurkers in the Shadows" said " The attack was elegant, like a ballerina trained from birth to be perfection in human form and trained by an elderly gymnast, whose own dreams of glory were crushed in a Nazi invasion and the rebuilding of his shattered homeland from the ashes" adding "These hackers are probably the children of disaffected Russian officials and former soviet revolutionaries" before nervously walking, then running, away.

A DNC spokesman, who insisted I call him Cecil Rodriguez, stated "We would just like to remind the electorate how evil Russians are, the depths of their depravity, and their innate talent for subterfuge, and how it is a part of them, and how their leader, Vladimir Putin, is the worst of the lot" and added, "off the record, even the 'Good Ones' are probably just spies".
Posted by Blake Newberry at 8:16 AM No comments: