Watch Mario Batali take a @#$% on your values

While the 56 year old chef, author, restaurateur and goblin king, with his signature fleece vest, orange crocks, shorts, taking a modern twist on classical Italian dishes and giant purple chindo he wears to children's parties, he has also been quietly been making a name for himself as a deviant Satan worshiper whose "predatory attitudes make him a danger and an affront to society, but, oh, what that man can do with a duck, after he's done @#$%ing it to death of course" said a clearly conflicted Chef Marco White.
In addition to his many crimes against decency, both common and basic, he seeks to steal from his employees, and rapes their wives when he knows they are away at work. 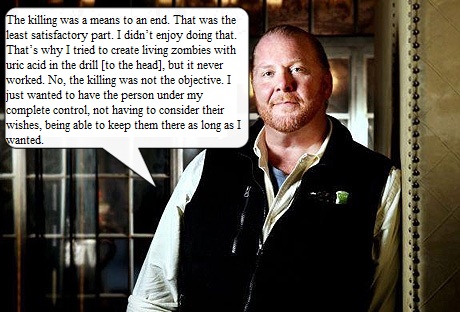 Posted by Blake Newberry at 4:13 PM